The mayoral race this year is flush with talent. Andy Schor seeks re-election but was also challenged by two former city council members and other local activists.

Defeating an incumbent is always a challenge no matter how you slice it; let's look at the votes by the numbers. This year voters went about 49% for Schor, 51% against. In many places, including central Lansing, voters preferred other candidates. Schor has a stronghold in Moores River Drive (his neighborhood) and Groesbeck. 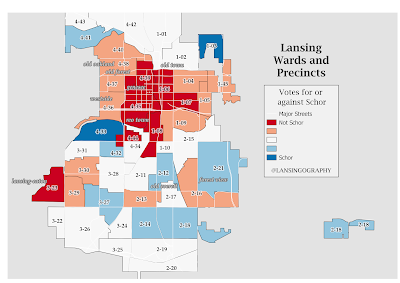 However, just because Schor didn't carry the most votes doesn't mean he will lose in the general on November 2nd. The areas in which Schor's opponents did well do not overlap; a coalition would be necessary to unseat our mayor.

Below is an overview of how Schor and the top three challengers performed. 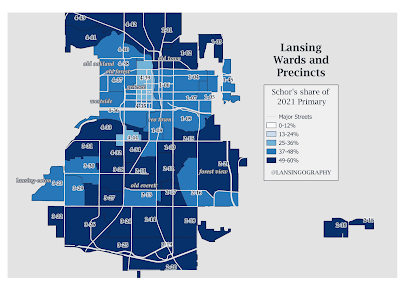 Schor made a strong showing across the south side and most areas outside the core of the city. 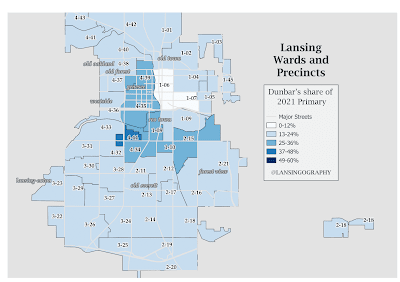 Dunbar, an organizer and city council member, made her strongest showing near Moore Park and downtown; notably this is where she is executive director of the South Lansing Community Development Association. Overall, she garnered less than half the votes Schor did (2,561 to 6,191). 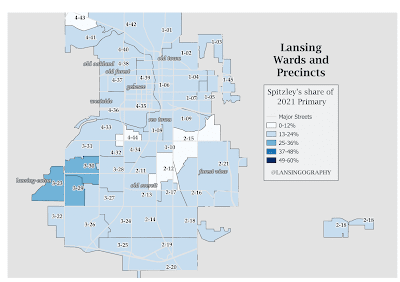 Spitzley, a long time city council member, showed mostly on the South West side, but was unable to carry enough votes to appear on November's ballot. 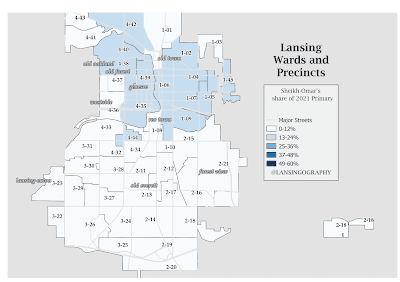 Sheikh-Omar, a Lansing resident and activist, attracted the attention of those across the north side, but also did not carry enough votes to continue in November.
If you aren't yet registered to vote, you can do so up to and including election day in Lansing. More information here. All voting results data collected from the Ingham County Clerk's office.

Thank you and congratulations to all the hard-working candidates. See you all in November!

Posted by Lansingography at 8:29 PM