Now that the elections are done and Michigan's Democratic delegates have gone to Joe Biden, it's interesting to see where each candidate polled strongly. Even in a medium-sized city such as Lansing, opinions were wide ranging. Let's see how people in the city voted based on location. You can see that Sanders is very popular near East Lansing and on the East Side, but Biden took the West and South sides.

Interesting too are the "protest votes" that went to candidates that had already suspended their campaigns. Tulsi Gabbard, who is still officially running, earned less than one third of the votes that Buttigieg, who has suspended his campaign, earned. 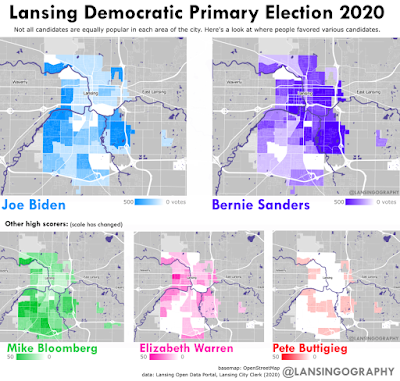 Posted by Lansingography at 1:20 PM