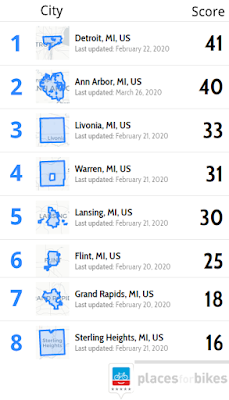 A fascinating part of their process is their transportation network analysis. They begin by marking streets as high stress (highway 496, or a fast street with narrow bike lanes like Aurelius) or low stress (residential roads, or the Lansing River Trail network). Then it determines which amenities are available via bike, such as employment, recreation, and services like health and grocery. You can see Lansing's network stress analysis here. 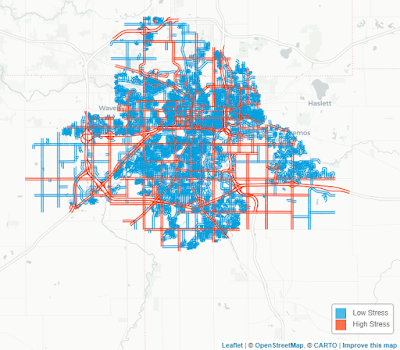 Here you can see what happens when we place that network over needs and services, such as education, health, recreation and so on. 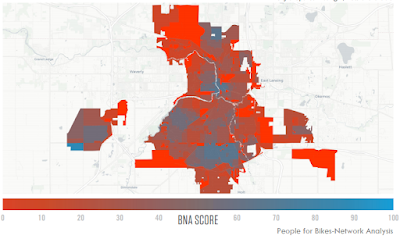 You can compare Lansing to other medium-sized cities online (Ann Arbor for example has a much higher rating and much more connectivity; it has a similar population size and area to Lansing). Lansing has relatively poor connectivity to a large number of areas--many neighborhoods are are locked off from city amenities by highways, trunks and primary roads without safe bike alternatives. Downtown is well connected, and there are a few areas on the South East side that are moderately well connected and walkable or bikeable. Most neighborhoods require a car to get to important places. The River Trail does a great job of connecting many areas to Downtown and the larger Michigan network, but there are lots of neighborhoods where people cannot access the river trail without driving to a trailhead or crossing busy roads with high speed traffic.

One other things to consider is city size: when small cities are included, the ranking shakes up quite a bit. Many smaller cities are doing a good job of ensuring access to city amenities. 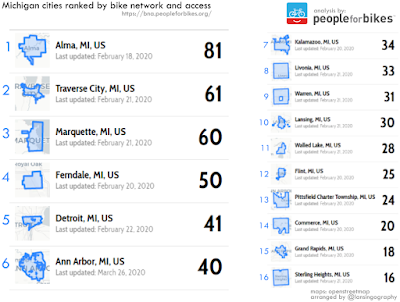 This year, Lansing's rating is 1.8 (last year we also earned a 1.8, in 2018 we had a 1.7). Shout out to the Lansing Bicycle Co-op, the Lansing Bike Party, TCBA and all of the other stakeholders working to make Lansing a better place to bike. Also, Lansing recently renewed the biking millage, and you can see some improvements going up on our current trail. Let's see what we can do to raise it and make us an even more bike-friendly city in the future!
Posted by Lansingography at 10:55 PM