EIG: Poverty in Lansing since the 1980s

"In the span of just a few weeks, the U.S. economy went from 'recession proof' to facing one of the largest single-quarter contractions since the Great Depression. From mid-March to mid-April, 26 million workers filed for unemployment, surpassing the nearly 23 million jobs created over more than ten years of economic growth."

So begins the Economic Innovation Group's May 2020 report on urban neighborhoods in the United States. 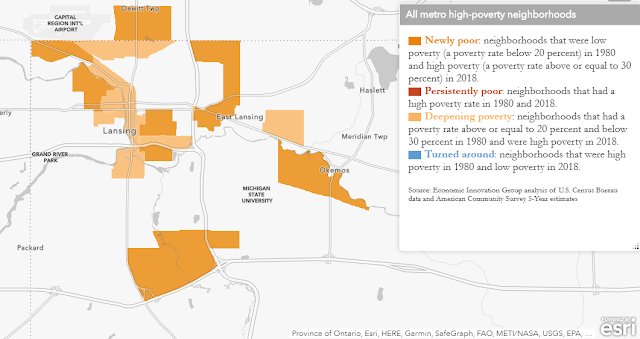 Lansing metro is among the areas analyzed--the report maps our city in terms of its change in poverty rates comparing a range of dates, including 1980, 1990, 2000, 2010 and 2018. On the original EIG site, you can click a tract to see the rates for various years. 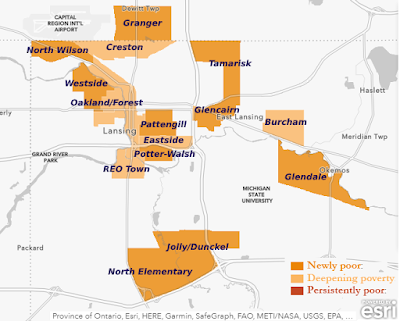 With neighborhood names and landmarks superimposed over the map we can get a clearer picture of which areas are hardest hit. Areas along the Cedar St corridor and north of the highway in the Eastside neighborhoods were already experiencing high rates of poverty in the 80s and have worse rates in the present day. There are some areas that were hit hard by the recession in the 2000s and haven't recovered (Tamarisk, Glencairn, Potter-Walsh); others have been hit by the most recent recession (Creston).

A few cities have seen "turn arounds" and others have seen areas that were in deep poverty both in the 1980s and now. Lansing has neither of those; we've seen some areas stabilize and others fall slightly.  Tracts are categorized as newly becoming poor, persistently in poverty, in worse poverty, or having been in poverty but "turned around". Interestingly, nationally, most neighborhoods' conditions worsened, only a small minority were in the "turned around" category.

The entire map, which looks at urban areas around the country is available online here.
Posted by Lansingography at 7:30 PM