What if the Beirut Explosion had happened in Lansing?

On August 4th, 2020, the port city of Beirut experienced two large explosions, tragically hamstringing its people and infrastructure. Using data publicly available on OpenStreetMap, we can imagine what an equivalent explosion would have been like in our area. 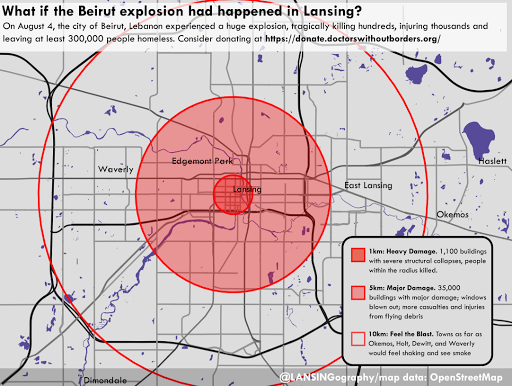 Within 1 kilometer (0.6 miles) of the blast, buildings were all but destroyed, leaving a crater. If the explosion had happened at our capitol building, nearly 1,100 buildings, many residential, would have been leveled in the blast. In Beirut, almost 200 people were tragically killed.

Within 5 kilometers (3.1 miles) of the epicenter, windows were blown out and facades destroyed. Pieces of buildings caused more damage and injuries as the heat and movement carried debris out from the city center. If the explosion had happened in Lansing, over 35,000 buildings could have experienced some kind of damage, including most Lansing neighborhoods.

Within 10 kilometers (6.2 miles) of the epicenter, people felt aftershocks and saw smoke rising into the sky. People as far as Okemos, Holt, Dewitt and, Waverly would be able to see the damage and feel the blast.

Lansing is much larger than Beirut in terms of area, but has one third of the people; the population of the city of Beirut is much more concentrated in a smaller space than Lansing, making the destruction more devastating. 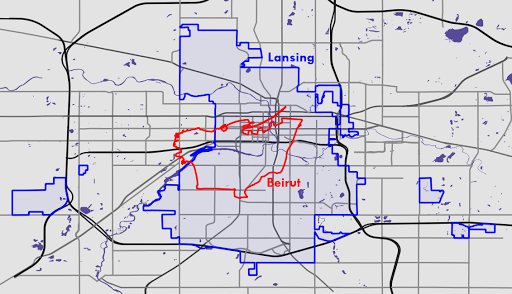 The United States has promised financial support although we have not committed an amount yet. Consider a donation to an organization like Doctors Without Borders that is doing work on the ground in the affected areas.

Posted by Lansingography at 11:07 PM