The Map That Moved 2,000 People: Redlining in Lansing

Redlining is a discriminatory practice began in American cities in the 1930s-1960s, where federally-backed banks denied mortgages to people of color preventing them from buying homes in certain neighborhoods. The word comes from the fact that maps were drawn up for major US cities and had certain "undesirable" neighborhoods circled, literally, in red ink--therefore, "redlining".

In the state of Michigan, 11 cities had redlining maps, including Lansing. 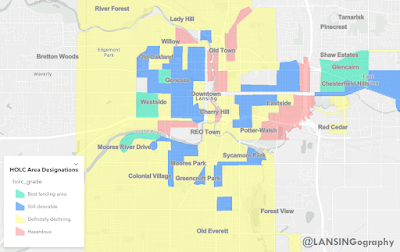 You can see in the above map, red areas that were considered "hazardous", yellow are "declining", blue are "desirable" and green are "lending areas". In Lansing, most of the redlined areas were heavily populated by people of color.

Redlining is illegal today, but it exacerbated racial disparities in the United States. The effects of redlining linger still, and researchers have studied health disparities, food deserts, academic differences, and economic insecurity in neighborhoods that were redlined.

Here is a story map that looks at the history of redlining in Michigan and specifically looks at what Lansing's 1940 redlining map looked like. It's a very interesting look at our city's history and which buildings and neighborhoods (one of which no longer exists) were impacted. You can see the accommodations and businesses that were demolished to expand the GM plant and build the Ransom E Olds freeway. 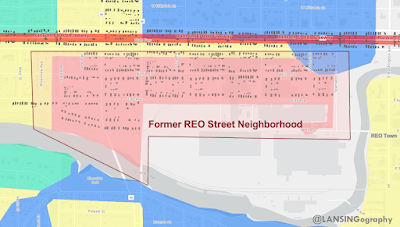 Included in the demolition were a large number of businesses which formed a large commercial corridor for African Americans; this also removed all of the green book "hotels" that traveling Black people at this time would have used since often hotels were explicitly discriminatory and may have been hostile to or refused service to Black Americans. 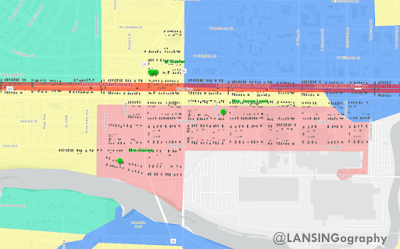 Redlining had a huge impact on the landscape of our city, being largely responsible for the division of Lansing into two parts and creating what is referred to collectively as "the south side".
Please click through and read the entire story.
Posted by Lansingography at 9:06 PM