Pokémon GO and walkability in Lansing

Lansing has 2,800 pokéstops and gyms within its boundaries. It's a great place for gaming! Most Pokémon GO players remember when the game started with Lanstronauts wandering downtown and rushing to LCC after someone yelled "Hey, I got a Blastoise over here!" Mayor Andy Schor even designated Wentworth park with a PoGO sign!

How many of those pokéstops and gyms are safe for your average pedestrian? Cities like Lansing are divided into walkable "islands" when high speed motorways and arteries carve out pavement rivers through their middle. Some people are comfortable walking around with cars coming by at high speed, but many people would prefer traffic calming measures or pedestrian designated areas like a park or the Lansing River trail for a walk, ride, or roll. For example, one of the highest pokéstop-dense locations is downtown, which is surrounded by daytime traffic, making it more convenient to Poké Go and drive.

Let's find a nice place to walk and play! We can divide the city into pedestrian islands and analyze which have the most points of interest. Here's a map with some of the highest density areas that are walkable and you can catch pikachu with every hat imaginable! 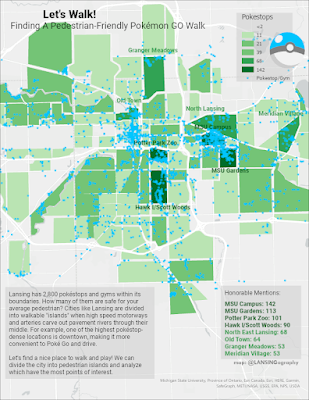 Posted by Lansingography at 5:27 PM