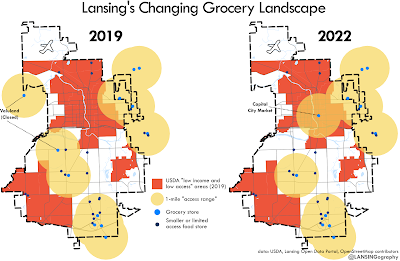 A "food desert" is a geographic area where residents' access to affordable, healthy food options (especially fresh fruits and vegetables) is limited.

In 2008, the U.S. Farm Bill requested that the USDA measure the extent of "food deserts" and discuss the consequences and causes. In the intervening years, the Economic Research Service has published maps of these so-called "food deserts"—that is, places which lack access to fresh food and produce. You can see the nationwide map and read more about it here.

Residents in a number of Lansing neighborhoods must travel quite far from their home to access fresh food, often requiring a reliable car or use of CATA and other transit.

The most recent analysis took place in 2019: the USDA determined which census tracts were both low-income and had low-access for food stores. Those locations are pictured in red above.

Generally these are census tracts wherein people need to travel more than one mile to find a market that serves a wide variety of foods and accepts food stamps, among other requirements. These cannot be membership-only stores (like Sam's Club or Costco). The USDA determines what qualifies as a "supermarket", which doesn't necessarily include all places you can get food.

The map above includes all supermarkets on OpenStreetMap--the ones that qualified under the USDA rules are bordered with a yellow mile buffer, those that don't are still included as blue dots.

From 1909 to 2010, Lansing had a large public market downtown, near Cooley stadium. This market was demolished in 2010 to build the newer mixed-use version of the Lansing City Market, which failed to retain grocers and farmers over its lifetime, leaving downtown folks needing to drive to grocery stores in other locations.

Recently, a couple of large grocery changes have occurred:

Meijer opened the Capital City Market in the heart of the stadium district, creating an opportunity for those living downtown.

In Edgemont Park, just south of the River Forest neighborhood, Valuland closed, leaving the residents on the northwest side needing to drive to Waverly for their grocery needs. A Valuland that served Colonial Village/Moores Park also rebranded then closed.

Food access is constantly evolving. I am curious to see if Lansing will be able to close these other holes in our food landscape and ensure access to fresh food for all Lanstronauts. The next USDA "food desert" map will likely look much different.

Posted by Lansingography at 11:31 AM