The Lansing River Trail is vast; it contains multitudes. Legend says: on foggy nights, those who easily get lost find themselves eventually in the Frandor parking lot with the gentle whiff of El Oasis' taco truck on the breeze (even though everyone knows there is no cycling infrastructure to get you there).

Those of us who use the LRT for transport or recreation or just to practice learning how to inline skate have probably seen announcements in a number of places about repairs or bridges out. (If you haven't, you can follow the LRT condition page on Facebook, that's usually a good place to start!) You may have seen an announcement saying, for example, that bridge #31 is being repaired this month, please find alternate routes. Where is bridge #31?

You're in luck, here's a quick and dirty of all the current bridges as of July. 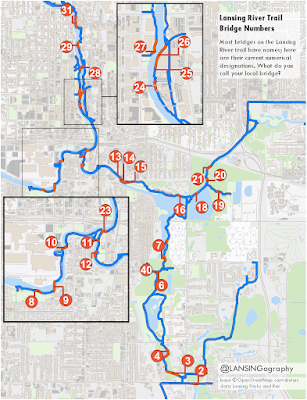 In the meantime, do you have a name for your local bridge?
For example, I know that Pokémon Go players refer to bridge 40 as the "Scott Woods Memorial bridge" (anything can be named a memorial if it'll help get a Pokéstop submitted, amirite wayfarers?)
At least one Southsider (okay, me) calls bridge #3 "the S curve" (can we please make this catch on?)
Scuttlebutt is that bridge #21 is called "turtle bridge" (does it look like a turtle? Is it because turtles gather there to discuss politics?)
You'll note that there are some missing numbers: over time some bridges have been decommissioned, merged, or replaced with pavement. For example: #13 was eliminated, and #17 was subsumed by #16 when we expanded it a few years ago.

Posted by Lansingography at 2:36 PM