The 5 Pieces of Lansing Charter Township

Why Is Lansing Charter Township in 5 Parts? 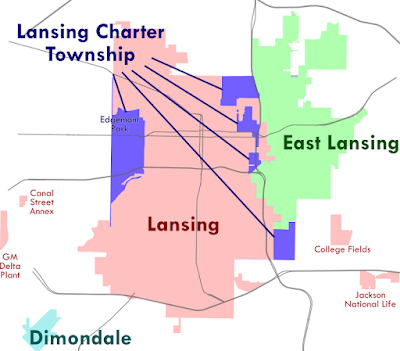 Michigan has 1,240 townships; counties are divided into a checkerboard of minor government divisions across the state. As cities incorporate and grow, townships shrink and become part of them. Over the years, Lansing "ate up" pieces of Lansing, Delta, and Dewitt townships.

140 townships have created charters; that is, people in those charter townships elect a township board, become self regulated and limit their tax liability, while providing services like fire, police, and sewer. A charter township can buy properties inside their bounds and develop commercial property (Eastwood Towne Center is a good example of this), or construct parks and facilities. According to law, they must be named for their township (which is why they frequently have the same name as the largest city in the township). These charter townships often rely on the amenities of nearby larger city, but by virtue of being a charter township, they have the legal right to resist annexation by those nearby cities.

A charter township is a uniquely Michigan phenomenon. No other state has charter townships. Typically, cities in the USA grow and annex land around them as they develop. In Michigan, as long as a charter township continues to provide a certain amount of services and doesn't have a lot of debt, nearby cities cannot annex their land.
Lansing Charter Township formed in 1963, so after that, the city of Lansing could not annex any of it without special circumstances. (There was a brief citizen movement to dissolve the Charter Township in 2013—an oft stated reason for staying a township was to avoid paying city taxes.)
One way for a part of a charter township to become part of a nearby city is for the residents themselves to petition to join the city, as the residents of Groesbeck have done this year in Lansing; it still has to be approved by the voters of the city (Lansing). This will appear on the ballot in November (your ballot can be viewed here at the SOS page: https://mvic.sos.state.mi.us/PublicBallot/Index).
Lansing has already expanded its borders several times since it was founded as Biddle City in 1835 and then later incorporated in 1859 as Lansing, Michigan's capitol. Here's a visualization of some of the expansions of the contiguous parts:

Posted by Lansingography at 11:12 PM