Follow up to Lansing Mayoral Primary: in Lansing, the top two candidates run in the general. Despite pockets of interest in candidates in various areas of the cities, incumbent Schor took the election.

Dunbar only topped Schor's votes in two precincts (East Side) and nearly tied in one (West Side). This was not enough to overtake Schor, as he kept his strongest areas (Moores River Drive and Groesbeck) and won the vast majority of Lansing votes. 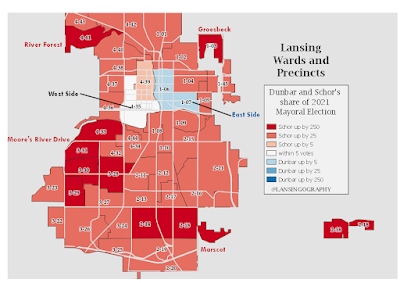 Posted by Lansingography at 7:07 PM